Home Archives Profile Subscribe
Rainy days on the East Coast... and a bit of a US Airways rant
As in life, chill for best results 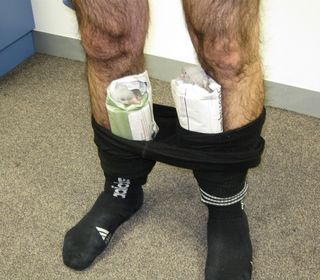 An Australian traveller was caught with two live pigeons stuffed in his trousers as he returned from a trip to the Middle East, customs officials said today.

The 23-year-old man was searched after authorities discovered two eggs in a vitamin container in his luggage, said Richard Janeczko, the national investigations manager for the customs service.

They found the pigeons wrapped in padded envelopes and strapped to each of the man’s legs with a pair of tights. Officials also seized seeds in his money belt and an undeclared eggplant.

I love this story... pigeons, eggs and seeds I can maybe understand, but an undeclared EGGPLANT??? And where exactly was he carrying said eggplant?