Charlotte- Then and Now in recent history 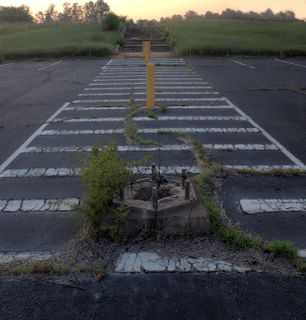 So there I was, out for an early morning stroll in Charlotte, NC. I walked through the hotel's back parking lot, noticing a lane that went off from the lot. Walking down the lane I came to a large, obviously disused, pie- wedge shaped parking lot... weeds growing from cracks in the asphalt, light fixtures removed, signs in disrepair. A walkway led to the tip of the wedge. At the lower end of the lot was a large pile of sewer and water pipes that had been obviously pulled from the ground.

Having nothing better to do, I continued walking to the far side of the lot where I found.... another parking lot, also pie- wedge shaped and equally abandoned. And yet another on the far side of it. The lots formed a semi-circle of a pie with the tips of the wedges pointing to a common center.

I walked to the tip of one of the parking lots, the center of the pie, and found

a large field at the crest of the hill bordered by trees on the far side. Interesting, but not terribly so. I took an image of the approaching sunrise... see previous posting... and returned to the hotel (BREAKFAST!).

Curiosity and insomnia got me thinking about the parking lots with their large field, wondering what had been there. Using the magic of Google Maps, I discovered it was the site of the infamous Charlotte Coliseum: a large facility built by the City of Charlotte in the late eighties to entice a pro basketball team, the Charlotte Hornets. The coliseum was a money-maker for several years largely due to the success of the basketball team occupying it. The building quickly turned into a boondoggle when the team's fortunes turned sour. It was too big (the largest NBA venue of its type), very noisy and didn't have many of the amenities affluent fans wanted. The basketball team abandoned Charlotte for New Orleans and use of the Charlotte Coliseum became sporadic. The coliseum fell into disuse, was closed in 2005 and after less than twenty years, was imploded in 2007. The lots and the field are all that remain. 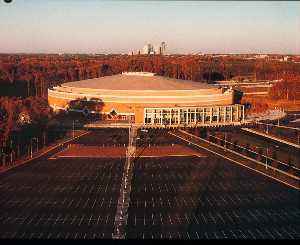 The arrows point to where I took the pictures We would find much happiness in reviewing the past.