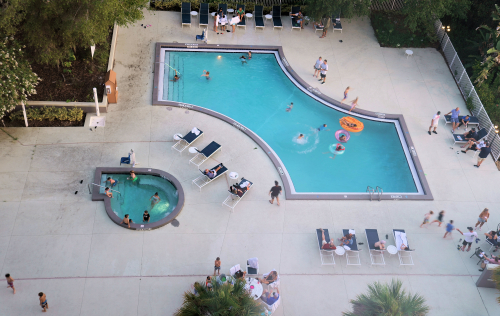 A local hotel in Ocala, FL yesterday reported an outbreak of little people. Guests returned to the hotel in the evening to find swarms of high-pitched, noisy little people throughout the hotel. A guest stated, "My God, they were everywhere... in the bar, on the elevator, in the halls, they took over the entire pool area making bystanders fear for their lives. The noise level caused by the little people was unimaginable." Hotel staff appeared overwhelmed by the hordes and were unable to maintain any degree of control.

Experts remain baffled, suspecting that an unusual atmospheric condition may have caused the abnormal swarm. One sarcastic subject-matter professional was heard stating, "It was definitely a disturbance in The Force."

Local officials urged calm, cautioning that historically swarms of this nature are short-lived. Law enforcement professionals were quick to announce that the swarm was not typical of Ocala, better known as the Horse Capital of the World, and that all steps were being taken to control the swarming. A full investigation by a high-ranking committee was announced the next day. The President was overseas on his first trip out of the country, but staff said he was briefed about the swarms and the potential damages that could occur.